Magneti Marelli recently celebrated the 90th anniversary of the founding of the legendary Fabbrica Italiana Carburatori Weber, an industrial company famous for its production of carburetors with high technological and quality levels, widely used by the world’s leading carmakers for mass-produced automobiles and by the best teams in motorsports for racing vehicles. 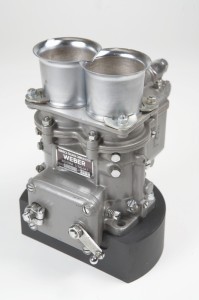 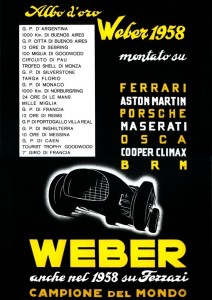 The Weber company was founded in Bologna, Italy, in 1923, and it gradually merged into Magneti Marelli, beginning in 1986. Weber’s experience and know-how laid the foundation for the development of technologies within Magneti Marelli, in the powertrain area, which have placed it today in the position of an important player at the global level in the production of systems and components for engines and transmissions of automobiles, motorcycles and light vehicles. During these 90 years of activity, the most beautiful cars made by Ferrari, Maserati, Lancia, Alfa Romeo and Fiat, as well as by Aston Martin, Citroën, Chrysler, Cosworth, Ford, Lamborghini, Mercedes, Peugeot, Renault, Volkswagen and Volvo, have fitted carburetors, injection systems and robotized gearboxes made by Weber and Magneti Marelli Powertrain. And, as far as motorcycles are concerned, Ducati, Piaggio Group, Harley Davidson, Moto Guzzi, Moto Morini, MV Agusta and recently even the giant Hero MotoCorp Ltd, the world’s largest two-wheeler manufacturer. The Weber company was founded in Bologna in 1923 by Edoardo Weber, a young technician born in Turin from a Swiss father. The carburetor with vaporizer for trucks and the “Econo-Super-Alimentatore” (Economy-Super-Supply) were the first products made by Weber: clever solutions to the operational and regularity problems of the engines in those years. The launch of the innovative carburetor, known as the “box” carburetor due to its shape, led to the company’s huge growth. This type of carburetor allowed vehicles to obtain performances otherwise unthinkable, with significantly lower consumption.

The success obtained by the Weber “twin barrel” carburetors made it possible to strike up collaboration relationships with the most prestigious carmakers, which started to fit the Weber carburetors on both mass-produced automobiles and racing cars. This is the case, for example, of Alfa Romeo, whose racing department was headed by Enzo Ferrari, with which a relationship based on friendship was established also at the personal level, up to the long-lasting and winning bond with Ferrari, from 1947 until the present. The plant located in Bologna, was inaugurated in 1940. After various expansion and revamping jobs, the historical plant became a landmark for the city and, to this day, it is still the home of Magneti Marelli Powertrain. Magneti Marelli Powertrain was set up in 2001, incorporating Weber’s industrial assets. The racing-mass production technical osmosis pushed the technological evolution toward new frontiers in terms of efficiency, performance, safety, reduced consumption and emissions, and alternative engines. Today, in a sort of ideal continuity with what Weber started 90 years ago, the areas of said exchange can be found in the evolution of engine control electronics, in the AMT robotized gearbox, in the transfer of GDI from mass-production to racing vehicles, and in hybrid engines designed for sustainable mobility and based on KERS (Kinetic Energy Recovery System) technology, originally developed for Formula 1.