If you ever wondered what one the most bizarre motorsports match ups would be, it would have to be Ken Block’s latest viral video release. Check it out below. 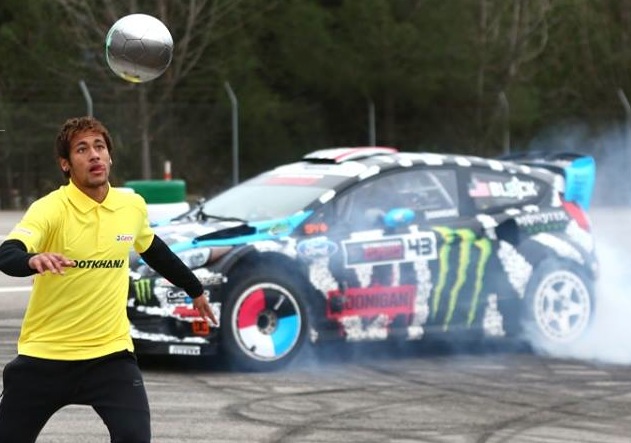 Block uses his Ford Fiesta rally car to take on 2014 FIFA World Cup star Neymar Jr. and his freestyle team. Despite what it looks like on paper, the opponents appear to be evenly matched – for the video at least. Block’s series of highly popular Gymkhana videos showcase to some degree what has been sort of a revved up combination of autocross and drifting, mainly in Japan. [youtube id=”SdBXpORSGu0″ width=”633″ height=”356″]

A proper gymkhana requires drivers to perform many car control maneuvers at speed on a course that is similar to an autocross course but with a twist. Drivers will typically perform 180 degree spins, 360 degree spins, drifts into parking boxes, figure 8s and other challenges that showcase their advanced car control skills. Drifting is especially encouraged as well as setting some sort of obstacle to go through within a certain time limit.

A parody of Block’s videos has even gone viral. Check out the video below. [youtube id=”sXGdCyZAdek” width=”633″ height=”356″]