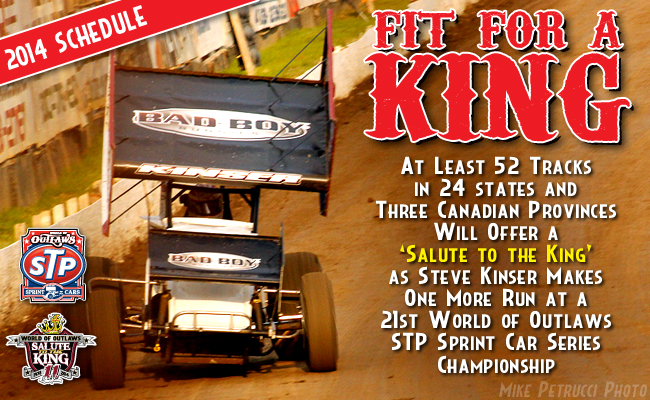 The World of Outlaws STP Sprint Car Series announced a mammoth 2014 schedule on Thursday during the Performance Racing Industry trade show at the Indiana Convention Center, highlighting the “Salute to the King” as the legendary Steve Kinser makes his final run at winning a 21st championship beginning in February at the DIRTcar Nationals.

The 2014 tour will feature 92 race nights at 52 different tracks across 24 states and three Canadian provinces. It all kicks off Feb. 14-15-16, 2014, during the DIRTcar Nationals presented by Summit Racing Equipment at Volusia Speedway Park, where Kasey Kahne Racing’s Daryn Pittman was victorius opening night last season and held off Tony Stewart Racing’s Donny Schatz in November at the World Finals to win the championship by the smallest margin in series history.

The Outlaws then head west March 5-6 to the Dirt Track at Las Vegas Motor Speedway for the mid-week Sin City Showdown during the track’s NASCAR event week. Then, the series will shift south to Arizona for the NAPA Auto Parts Wildcat Shootout at Tucson International Raceway prior to spending the next five weeks competing in the Golden State, including March 22 at the Stockton 99 Dirt Track and an exclusive two-day event April 5-6 at scenic Calistoga Speedway.

A huge new event on the schedule returns the series to its Texas roots. Following April 15 at El Paso Speedway Park, the April 18-19 Texas Outlaw Nationals brings the World of Outlaws STP Sprint Cars back to the place where it all began in 1978 at Devil’s Bowl Speedway. It marks the first time in more than ten years since the Outlaws invaded the suburban Dallas city of Mesquite, where the World of Outlaws got their start nearly 37 years ago.

One of Kinser’s favorite venues is Eldora Speedway in Rossburg, Ohio, where the Outlaws race five times in 2014 with the first two events on May 2-3. Following Eldora, which was one of the venues on the series’ original 1978 tour, the Outlaws will make their inaugural appearance at Jacksonville (Ill.) Speedway on Wednesday, May 7. There are 14 events in May, many primarily in the east.

A 10-race June schedule includes a run through the Midwest that wraps up with a big three-day weekend when the Outlaws take on 34 Raceway on Friday, June 27, in Burlington, Iowa; Beaver Dam (Wis.) Raceway on Saturday, June 28; and Cedar Lake Speedway on June 29 in New Richmond, Wis.

Fans came out by the boatload last season to see the World of Outlaws STP Sprint Cars at Huset’s Speedway in Brandon, S.D., where the series returns on Wednesday, July 2, to kick off its busiest month of the year with 15 race nights. The storied Boot Hill Showdown on July 4-5 at Dodge City (Kan.) Raceway Park will give the Outlaws a chance to celebrate the Independence Day holiday in the Old West.

The Brad Doty Classic on July 9 at Limaland Motorsports Park in Lima, Ohio, sets the stage for the proverbial “Month of Money” kickoff July 11-12 at Eldora Speedway with the Kings Royal weekend. A swing through Pennsylvania, including a second event at Lincoln Speedway, and the Northeast, with races in Quebec and Ontario, heightens the intensity for the Ironman 55 on Aug. 1-2 at Federated Auto Parts Raceway at I-55 before the sprint car world descends on Knoxville, Iowa, for the week-long FVP Knoxville Nationals, Aug. 6-9.

The championship picture will become less distant as the August tour through the Pacific Northwest, including Washington’s Skagit Speedway, gives way to September and shifts into California and the Gold Cup Race of Champions on Sept. 5-6 at Silver Dollar Speedway in Chico.

A run back through the Midwest, with a return to Terre Haute (Ind.) Action Track for the first time since 2006, and the huge National Open at Williams Grove Speedway will lead to what’s quickly becoming the most anticipated event on the schedule, the Nov 6-7-8 World Finals at The Dirt Track at Charlotte, where Kinser’s Salute to the King will conclude with what he is no doubt hoping will be a remarkable 21st World of Outlaws STP Sprint Car Series championship.

The full schedule, which includes several events yet to be announced, is below: