“To say that a brand-new car out of the box has run 36-hours of racing absolutely flawless, I don’t think that has ever happened,” said Ricky Taylor, driver of the No. 10 Konica Minolta Cadillac DPi-V.R.

The top two finishers in last weekend’s 65th Annual Mobil 1 Twelve Hours of Sebring were the same as the Daytona 24 hours a month earlier, but for Ricky Taylor this time there was no controversy over the win, with a margin of 13.614-seconds over the No. 5 Action Express Cadillac DPi. The car Ricky Taylor shared with his brother Jordan and newcomer Alex Lynn (at Daytona they had Jeff Gordon and Max Angelelli as co-drivers) was fast and reliable all day and was never seriously challenged.

Jordan Taylor said: “It is more proof that this platform is great. We’ve run 36 hours of racing without a single problem. It is great to have Konica Minolta in victory lane again and to celebrate that with Ricky and Alex is really special.”

Alex Lynn commented: “Jordan and Ricky are amazing teammates they drove an awesome race today. The team was flawless. It is 36 hours of zero problems for Cadillac on the race track. The team has won the two biggest races in America and a podium sweep for Cadillac. Great result for all concerned.”

In fact, a Cadillac DPi led the race for 11 of the 12 hours. Each of the three Cadillacs led the race with the final stages renewing the battle between the No. 10 and the No. 5 Mustang Sampling Cadillac DPi-V.R from Daytona. 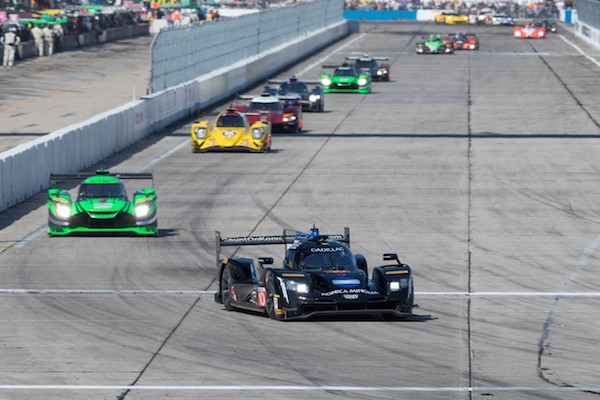 Eric Curran was at the wheel when he exited Turn 17 and tucked under the 22 to pass on the inside when the 22 driver turned in to go onto pit lane. Curran hit the 22 and was stalled in the middle of the track. He had to be towed to the paddock where the team quickly fired the Cadillac DPi-V.R 6.2L engine and he rejoined the race, three laps down. The team then received a stop-and-go-penalty for working on the car in pit lane when the pits were closed.