Volkswagen of America, Inc. has announced that the 2015 Golf TDI Clean Diesel, part of the family of vehicles that won the 2015 North American Car of the Year, has set a new Guinness World Records achievement for the “lowest fuel consumption—48 U.S. contiguous States for a non-hybrid car” with a remarkable 81.17 mpg. Traveling 8,233.5 miles around America in 16 days on $294.98 of Shell Diesel fuel, the Golf beat the previous mark of 77.99 mpg by more than 3 mpg, and also beat the hybrid vehicle record of 74.34 mpg by more than 6 mpg.

“Covering 8,233.5 miles on just 101.43 gallons of Clean Diesel fuel is a remarkable accomplishment, and solid proof of the efficiency and fuel economy of Volkswagen’s TDI Clean Diesel vehicles,” said Michael Horn, President and CEO, Volkswagen Group of America, Inc. “Whether on a long road trip, or even in daily commuting, the great mileage and long range of our TDI models is a pure convenience factor that few other vehicles on sale can match. It’s a simple formula: Less Stop, More Go!” 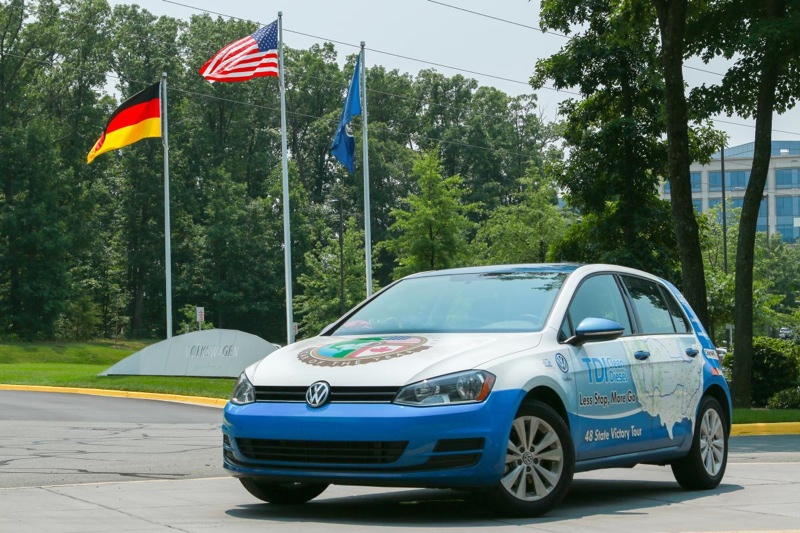 Wayne Gerdes, automotive journalist and founder of cleanmpg.com, was the primary driver. His co-driver was Bob Winger, an electronics engineer long involved in energy and conservation projects. Gerdes is an expert hypermiler who has set mileage records in more than 100 vehicles. In 2013, Gerdes set the Guinness World Records title for “lowest fuel consumption—48 U.S. states for a non-hybrid car” in a 2013 Volkswagen Passat TDI, with an outstanding 77.99 mpg.

“Volkswagen’s TDI Clean Diesel engines are just amazing,” said Wayne Gerdes. “I don’t think people realize the potential mileage you can get from them. In our experience, it is possible to get truly impressive mileage results by using just a few simple fuel-saving techniques.”

The 2015 Golf TDI uses Volkswagen’s advanced turbocharged and direct-injection Clean Diesel engine to achieve an EPA estimated highway fuel economy of 45 miles per gallon when equipped with the six-speed manual transmission. The Golf TDI joins five other models in Volkswagen’s TDI lineup that achieve an EPA estimated fuel economy rating of 40 mpg or better on the highway.